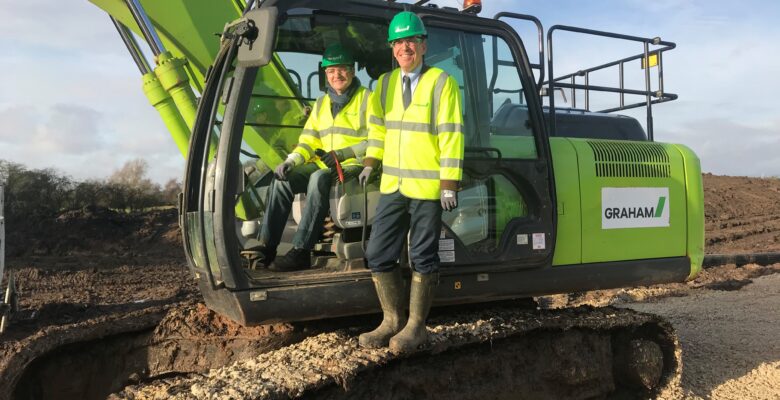 Work is progressing well on the long-awaited £53 million Poynton Relief Road, following a visit from the Cheshire East Council deputy leader and the local MP.

Key works to facilitate construction are taking rapid shape, despite the impact of Covid-19.

Cheshire East Council deputy leader Cllr Craig Browne and Macclesfield MP David Rutley visited the site to see at first hand the work on the new road, which follows decades of campaigning to ease the burden of high traffic volumes and congestion in Poynton and neighbouring areas.

Cheshire East Council’s contractor, Graham, is undertaking enabling works to clear parts of the site, create site access – including laying 9,000 tonnes of stone for a haul road to transfer heavy machinery and materials across the site – erect boundary fencing and prepare the ground for construction.

The design and build contract was awarded in autumn 2019 to Graham, who has done detailed design and site surveys, including archaeological and ecological appraisals and the creation of new ecological habitat.

The 3 km road is expected to open to traffic in Autumn 2022. Funding for the scheme was agreed by government earlier this year, following a successful bid by the council for local growth funding administered by the Cheshire and Warrington Local Enterprise Partnership.

It is exciting to see the work under way and really starting to take shape on the long-awaited Poynton Relief Road. The council views this project as a key part of our major infrastructure plans to really improve connectivity across the whole borough.

“This new road will not only cut the long-standing problems of congestion and pollution in Poynton but also greatly improve access to Macclesfield and other key strategic sites to the A555 and on to Manchester Airport, supporting jobs, education and the visitor economy. A wide footpath and cycleway alongside the new road will also support cyclists and pedestrians as a greener option for travel.”

Poynton Relief Road will be a modern single carriageway. The relief road will also include two overbridge crossings for use by walkers, cyclists and farm vehicles.

A 3.5-metre-wide combined cycle and footway will run beside the length of the route on the western side of the main carriageway.

It was good to see the positive progress that is being made at the start of this important infrastructure project and to learn more about the detailed plans for the months ahead.

“This is very good news for the people of Poynton, as the long-awaited relief road will help to significantly tackle traffic congestion and enhance air quality in the village. I will continue to keep close to progress on the scheme as it is developed, working with Cheshire East Council and the contractors, Graham.

“When it is completed, the road will not only improve the lives of local residents but also support local economic development plans – the new project is very welcome.”

It was great to be able to welcome the MP for Macclesfield and Cllr Browne to the Poynton Relief Road site and to show them the great progress that has been made with the enabling works, despite the issues we have faced during this turbulent year.

“Despite the challenges this year’s circumstances have brought to the project, our team has worked tirelessly with the council and our stakeholders to ensure this much-needed scheme continues to progress positively. Once complete, the Poynton Relief Road will provide a significant boost of economic and social regeneration to the north of Cheshire East.”

Cheshire East Council contributed £21 million towards the cost of the scheme with Cheshire and Warrington Local Enterprise Partnership providing £5.6 million from the government’s Growth Deal and the Department for Transport providing £16.4 million. A total of £7.7 million is planned to come from developer contributions.