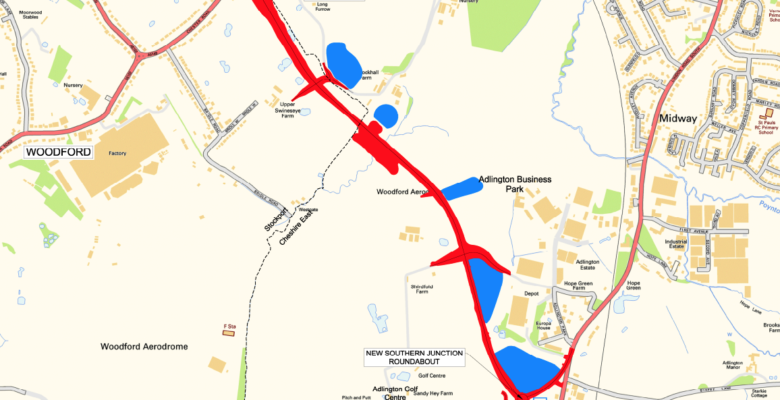 The project will link the A523 London Road between Poynton and Macclesfield with the recently completed A6 Manchester Airport Relief Road with a 3km single carriageway. A cycle path and footway will also be built alongside the road for its full length.

The project is estimated to take 14 months to complete with major works due to start in May 2020, passing beneath A5149 Chester Road between Woodford and Poynton. Enabling works are already underway.

The road link aims to support ongoing regeneration projects in Macclesfield and Poynton. The new road also provides a more suitable route for HGVs and will reduce traffic congestion in Poynton, benefiting increasing numbers of commuters travelling from Macclesfield into Greater Manchester.

Some of the funding for the scheme will come from developers, including £5.4 million from the 1,500 planned homes at Woodford Garden Village. A further £2 million will come from sale of council land and assets including Adlington Industrial Estate.

As well as passing beneath Chester Road, two additional bridges for existing rights of way will pass over the carriageway. The scheme will also incorporate environmental mitigation works, including protection for flora and fauna such as the great crested newt.

The road forms part of the South East Manchester Multi-Modal Scheme (SEMMS) between Stockport and Cheshire East councils to improve transport links in the area. As the scheme falls entirely in Cheshire East Council’s boundary, it will lead on this project.

Planning for the Poynton Relief Road project was submitted in September 2016. Decision notices were formally issued in July 2017.