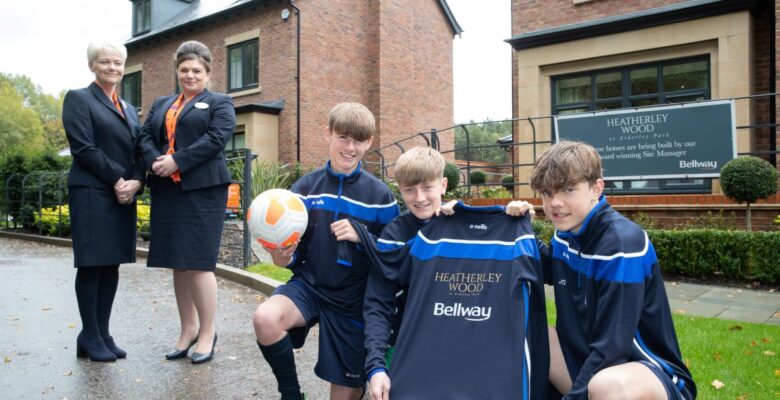 Wilmslow Town FC has secured a new sponsor, with the Under 15s Panthers receiving new tracksuits for travelling to and from matches, as well as training, from housebuilder Bellway.

With the cold weather arriving, Wilmslow Town FC are keen to kit all teams out with branded tracksuits, keeping the players warm during the winter months and ensuring they look smart and professional at games.

Committed to supporting the local community, Bellway got in touch with the Club offering financial assistance and is delighted to provide the Under 15s Panthers with much needed tracksuits.

With build at its development, Heatherley Wood located within Alderley Park, well underway, the housebuilder invited a few of the players to site for a show around and the chance to showcase their new training gear.

Now more than ever it is so important to support the local community and after so many months of not being able to play football, its great to help Wilmslow Town FC get the players ready for winter matches.  The tracksuits look great and we wish the Under 15s Panthers success this season.”

Andrew Prentice, Manager of the Under 15s Panthers at Wilmslow Town FC, added:

We are hugely grateful to Bellway for the provision of the tracksuits for the boys.  With temperatures dropping, keeping warm before and after matches is so important to avoid injury, and the Club is keen for all players to look professional as they travel across Cheshire for games.  Without the generosity of local businesses such as Bellway, this would not be possible.”

Wilmslow Town FC was established in 2002 by Erik Garner, who remains the Chairman of the Club.  It is one of the largest junior football clubs in Cheshire with teams from Under 8s up to Under 17s, and the largest football club in Wilmslow comprising approximately 38 teams.