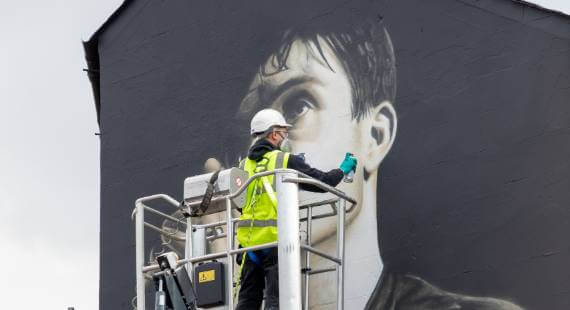 Macclesfield ‘Treacle Town’ Art Trail will feature highly visible pieces of artwork to further raise the town’s profile as a creative destination and drive footfall to local businesses in the centre, as demonstrated by similar trails in other towns locally, such as Stockport.

The trail, which will be known as ‘Treacle TART’, will incorporate existing art installations – including the recently completed mural of Joy Division frontman Ian Curtis, in Mill Street and kerbstones along the revamped Castle Street, which incorporate extracts from poem ‘A Love Letter To Macc’ – along with three new projects planned for key routes around the railway station.

Projects have funded by Avanti West Coast, who serve the town with their Pendolino trains, through their Customer and Communities Investment Scheme.

At the station itself, it is hoped a mural can be created on one of the lift towers, to be seen prominently from the Silk Road and by passengers, while a piece of artwork is also planned along the station footbridge. In nearby Sunderland Street, it is hoped that shop shutters will be used as the canvas for multiple pieces of artwork, increasing the area’s appeal to new business and residential investors.

While injecting personality and vibrancy into these areas, it is hoped the projects will encourage more people to walk or cycle to the station – helping to cut carbon emissions and improve air quality. They will also give local people opportunities to take part in creative projects which directly improve their town, including through workshops and drop-in activities.

“Macclesfield is bursting with culture and creativity and the Treacle TART is a fantastic way to celebrate this, while also encouraging people to visit areas of the town centre for longer and increase footfall to support local businesses.

“I would like to thank Avanti West Coast for their support in funding these latest three projects – the locations are crying out to be transformed into something spectacular.

“Not only will key areas of the town centre become much more appealing, they will also provide fantastic opportunities to work with the community to generate ideas and nurture local creativity.”

“We’re excited to be working with Cheshire East Council to bring areas of Macclesfield to life with the Treacle TART, as we want to champion the places and communities we serve.

“Macclesfield station is an important gateway to the town, and by capturing the personality of the place and people we hope this trail will provide a warm welcome to those travelling to or from the area by train.

“We also hope this project will encourage people to explore this beautiful town and consider green journey options by admiring the art while walking or cycling to or from the station.”

The projects will be a significant contributor in delivering the objectives of the council’s Macclesfield Town Centre Strategic Regeneration Framework, which sets out the need for improvements around the station area, and the importance of this to local people.

All three are expected to be completed by spring next year and further details will be announced over the coming months.

“Macclesfield is a town with a unique sense of place. We are as proud of our cultural heritage as we are of our creative vision for the future of the town.

“As Macclesfield is a gateway to the wonders of the Peak District, so the station is a key gateway site for visitors and a welcome home for residents.

“We are absolutely thrilled that Avanti are investing in ways to draw people into and around the town using art as a means to engage people in discovering all Macclesfield has to offer.”