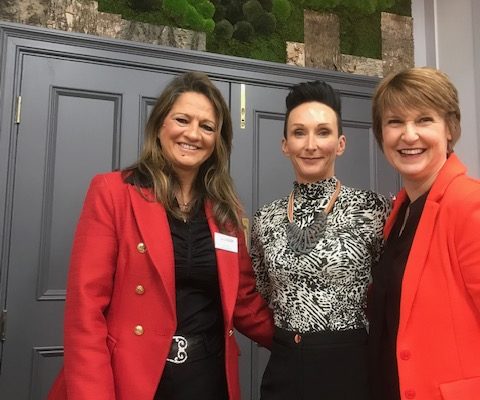 Sophie Lawler, CEO of Total Fitness, talks about rising to personal and professional challenges and getting spectacular results in her first full year in the job.

I’m Sophie. I grew up in Teesside, a middle child with three other siblings including a really naughty little brother who was always way cooler than me. A daughter to two very strong willed parents who worked tirelessly for the NHS. A strong headed gymnast who wouldn’t listen to her coach.  An ice cream thief.  A passionate advocate for the little person. An emoji lover.  And someone who overshares when they are nervous. That’s me.

We’re a business which starts with a team of people, leading other teams, who lead teams of their own, who lead our members to be better every day. And our relationships with our members is absolutely one of leadership, because we’re in a position of influence.

Our story will always be one of people, so if you’re expecting me to advise on how to run a health club you’ll be disappointed. But then again, I can’t imagine that the intricacies of chemical dosing of swimming pools, bather load metrics, the CHP commercial agreement, or transforming our IT infrastructure will make for good reading!

So let’s get the boring bit out of the way….I’m the CEO of Total Fitness. We have 17 clubs in the North of England and just under 95,000 members – an average of 5-6000 members per club, with average membership price of around £35-40 per month. Strategists would say they’re mass market full service product, with a mid-market strategic position at a macro level, in under-served locations. More simply, they’re bloody big clubs, with a lot of kit and a lot of water in difficult market places where we don’t charge a fortune for a full access membership.

I’ve been in the fitness industry for a long time. Since I was 20 and paying my way through a Masters degree. Most of my career was dedicated to a company called Fitness First – once the largest health club operator in the world. I was part of the team of Directors that restructured and turned around the UK business, before selling it to DW Sports in 2015, and following that I worked on the International Board for that business, doing something similar in Australia, Asia and latterly Germany.

After completing the job in hand there the Group CEO and I stepped down at the same time, and I took six months to contemplate and find my next role and so here I am. I arrived in late June 2018, so I’ve been in role for 18 months. Total Fitness was in need of a change, and a change environment is perfect for me. I thrive in a dynamic, somewhat chaotic environment which needs strategic direction and pace.

2019 was my first full financial year, and as we close the books on that year, we grew the membership base by 8,500 members – over 10%. To be clear that’s like having two extra clubs. Annualised that’s about £3million in revenue. And we need it!

It’s been my first gig as a CEO, for which I’m very grateful. It takes a leap of faith from a Private Equity house to award a CEO gig to a first timer. And whose age (at the time) still started with a 3 (by a few months!) Never mind a girl, which I see no problem by the way… but it does appear to be a rarity, and a bit of a thing.

CHALLENGE 1 – Did you aspire to be a CEO?

The simple answer is no,  not at all. Never. So why on earth am I here? There was a point, not when I wanted to, but when I realised that I could and I should.

Frankly, I didn’t know I could. I only realised I could when that light was shone for me by some professional peers who asked me why I wasn’t asking for the job!

When it comes to why I should I realised that when I visited some clubs with the then CEO and could see the underlying challenges, could understand the strategic position and how tough it is, and knew I had some stuff in the locker to help. So that combination of things – that I could, and I should – made me realise that there was a desire there… I wanted to turn it around. And so I had a total out of body experience and made the maddest call of my life and got the job.

CHALLENGE 2 – performing the duties of a CEO

There is no training course, no job description, you simply have a long contract with the ownership (in this case Private Equity) in which you’re obligated to perform the duties of the CEO. Over that time I’ve finessed my own job description and refined it to two lines:

My job is to create the growth strategy, and build the leadership culture.

And when I arrived I was good at the first bit – the strategy – and OK at the second. But what I realise now is that being OK at the second bit of the job description isn’t good enough. I’m the custodian of the leadership culture – I’m responsible for building the right leadership culture for our business. That doesn’t mean I’m great at it! Far from it. We’re all on that journey and that takes practice every day.

Practice means some mistakes (and taking ownership for those mistakes) and some successes.

But importantly if I’m on that leadership journey, then the business is on it too.

So what about the professional challenge? Would I do anything differently?

Whenever there is success you’re asked this question. And would I? Probably. But I don’t have an exhaustive list. Because I prefer to learn and respond quickly rather than wait for next time. I’m on a mission for improvement – for myself, for the people that work with me, for our members, and as a result our business will benefit.

I mess things up constantly, I’m sure I do. I get an awful lot of stuff right too, but on this notion of what’s right and what’s wrong I’m not sure it’s that binary… there’s a gradient in there and there’s always subjective opinion. So would I do anything differently? Probably. Do I know what that is? No. But I will do things differently in future because I’ll do them better, because I will be better.