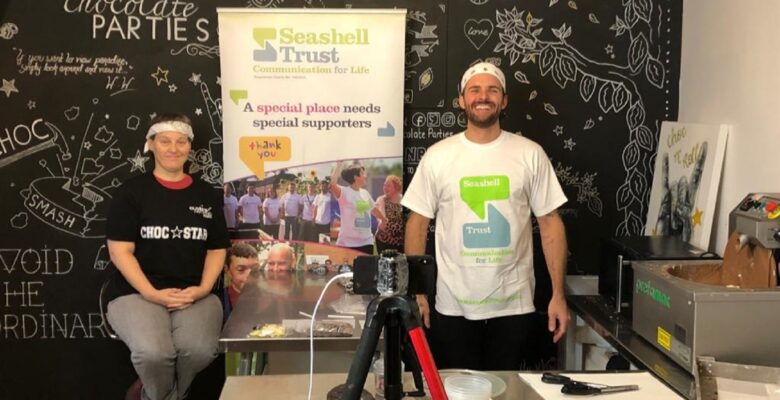 Seashell Trust, in partnership with Oliver Dunn, chocolatier, aka Oli the Choc, has been awarded an Official Guinness World Record for “Most users in a lollipop-making video hangout”.

A total of 511 people took part in the online hangout to help Seashell and Oliver set the record. Many of Seashell’s corporate supporters made up the numbers, including Laltex, Slater Heelis, Citation, Morson, Ultimate, Shepherd’s Friendly and Barclays, whose New York team even got in on the record. Seashell also sends a thank you to THG for their support in hosting the live event.

In addition to achieving the Guinness World Record, Oliver has made a donation of £7,642 to Seashell from the sale of the kits. On top of this incredible amount, Seashell received donations totalling £5,543.75, giving them a grand total of £13,185.

We’re sending a huge Seashell thank you to everyone who bought a lollipop kit and took part in the World Record attempt.

“To raise over £13,000 at a time when our fundraising has been devastated by the impact of Covid-19 is a significant amount for Seashell, and we couldn’t be more grateful to Oliver for all his support.”

After visiting Seashell early last year and having seen for myself the incredible work they do helping young people with complex disabilities, I was really keen to get creative in how I could help support them in raising much needed funds.

“To be able to put on an inclusive public virtual event, giving children and their parents happy memories from 2020 felt fantastic too and the fact we all achieved the Guinness World Record together was a massive bonus and the icing on the cake!”

We were so pleased to support this event. It was fantastic to involve our team members, friends and family, who all had a brilliant time, and we’re thrilled that we helped set the world record.”