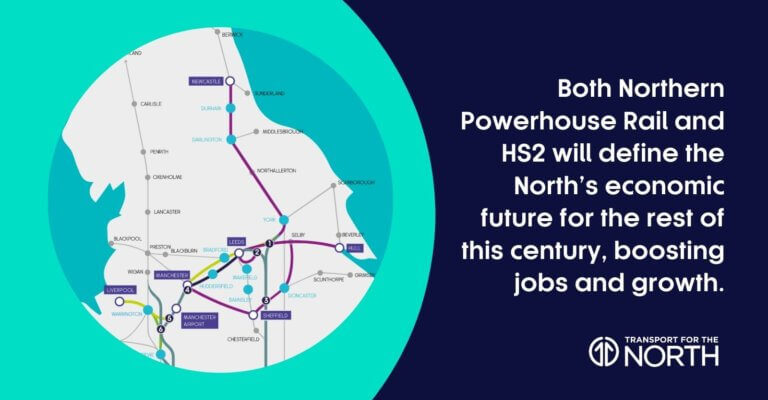 Transport bosses and regional leaders from across Northern England have agreed proposals for investment into the region’s rail network.

Proposals also include a preferred route for an East-West high-speed rail route across the region, dubbed Northern Powerhouse Rail. Transport for the North (TfN) drew up the plans with the ambitious project now submitted to the Transport Minister for consideration upcoming rail investment plans for the region.

The Government’s Integrated Rail Plan which sets out infrastructure investment in the North and nationally, is expected to bye published later in March 2021. Local leaders in the region have called for full commitment to HS2 and Northern Powerhouse Rail as well as further investment in the region’s existing infrastructure in order to boost the region’s economy after the pandemic. TfN estimate that the two high-speed rail routes could by 2060 deliver 74,000 new jobs, contribute £14.4 billion to the economy and remove up to 58,000 cars from the roads.

Plans for the region submitted to government include a mix of new high-speed routes, as well as major upgrades and electrification on routes running East to West from Hull to Liverpool. Proposals include:

This is the culmination of years of work on the original Northern Powerhouse vision to radically connect the North’s communities by rail; create jobs; and boost the northern economy for decades to come.

“Communities and businesses want to see certainty on what will be delivered and when in order to make key investment decisions and create new opportunities.

“We hope that the significant body of evidence, worked up alongside the Department for Transport, will be reflected in an ambitious commitment to investment in the North in the Government’s Integrated Rail Plan. We can then swiftly press on with joint delivery for the Northern public. We’ve done the work together, now let’s get on and deliver for the North together.”

Cllr Louise Gittins, Leader of Cheshire West and Chester Council and Vice Chair of Transport for the North said:

Now, more than ever, we need to increase confidence in the North as it will play a pivotal role in the nation’s economic recovery.

“Certainty is key to investor confidence and certainty over truly transformational connectivity will undoubtedly drive economic performance and increase productivity.

“I urge government to ensure that the Integrated Rail Plan adopts the evidence-led advice from Transport for the North, which not only comes from an inherent understanding of the North’s actual transformative need but has genuinely been devised with the interests of the whole nation at its heart in terms of sustained economic contributions rather than the lowest cost capital options.”