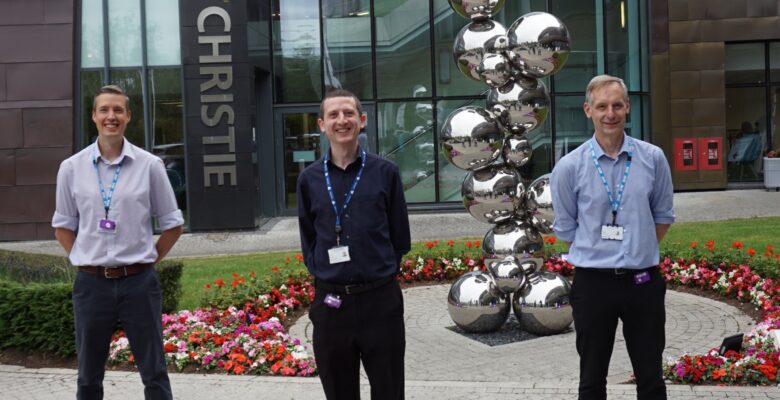 The Christie at Macclesfield has appointed its first staff to key roles as recruitment begins for the £26 million cancer centre, due to open in December 2021.

A team of three people will be responsible for maintaining one CT scanner and two radiotherapy treatment machines or linear accelerators which generate the x-ray beams to treat cancer. Two engineers and a physicist will help ensure that the scanner and radiotherapy equipment at The Christie at Macclesfield are safe, accurate, and available for patient treatment.

Lee Smith (51) from Wythenshawe is the new engineering manager for The Christie at Macclesfield and he will work with former Royal Navy engineer Lee Nixon (40) from Middlewich who has been appointed as a medical systems engineer. Physicist James Agnew (34) who lives in Glossop completes the trio.

Having worked at Wythenshawe Hospital for almost 30 years maintaining medical devices in various maternity and adult ICU departments, initially as part of The Christie Medical Physics and Engineering team, but more recently as part of the Manchester University Foundation Trust, Lee Smith is looking forward to this new and exciting challenge.

Lee Nixon (40) from Middlewich swaps a 23-year career travelling around the world as a submarine weapons engineer to help keep The Christie’s radiotherapy machines targeted and locked onto cancer. Whilst researching career options toward the end of his Navy contract, Lee realised that the basic components of the radar systems which he had previously maintained on submarines were similar to those in the linear accelerators used for radiotherapy. He said:

“I wanted to work for The Christie because it is a trusted and highly regarded organisation. This job means I will be using my existing skills in a new way whilst doing something very rewarding to support patient care for people with cancer.”

Lee plans to run the Manchester Marathon in October this year to help raise money for The Christie at Macclesfield charity appeal. The Christie charity needs to raise £23 million for the new centre.

James Agnew (34) is the youngest of the trio and has been appointed as a clinical scientist for The Christie at Macclesfield. He started at The Christie as a trainee medical physicist in 2013 after completing a PhD in particle physics at The University of Manchester. His expertise in the impact of strong magnetic fields on the way radiation dose is measured set him up to work on The Christie’s cutting edge MR-linac treatment machine – one of only seven in the world at the time it was commissioned. James also works in the wider radiotherapy department at The Christie making and checking patient treatment plans. He said:

“I’m very excited about my new role. I’ve got the experience of working in a small team closely with engineers and radiographers to set up a new service at The Christie – the MR-linac. This will be invaluable for The Christie at Macclesfield as we aim to get the radiotherapy service up and running as quickly as possible so we can start treating patients. The Christie at Macclesfield will treat people closer to home and avoid them having to come all the way into Manchester and that means they can get back to doing what matters to them sooner.

“I’ll be responsible for ensuring that the radiotherapy equipment is installed and operates correctly and that the radiation output from each of the machines is safe for treating patients. Once the centre is up and running I’ll be the main point of contact between the physics team and other staff groups like the radiographers and engineers to keep the service running smoothly.”

The Christie at Macclesfield will transform cancer care, providing care closer to home for more than 1,500 patients a year. The new centre at Macclesfield Hospital will provide a range of holistic services including radiotherapy, chemotherapy and a wider range of clinical trials than at present; it will provide 46,000 cancer patient appointments and visits each year.