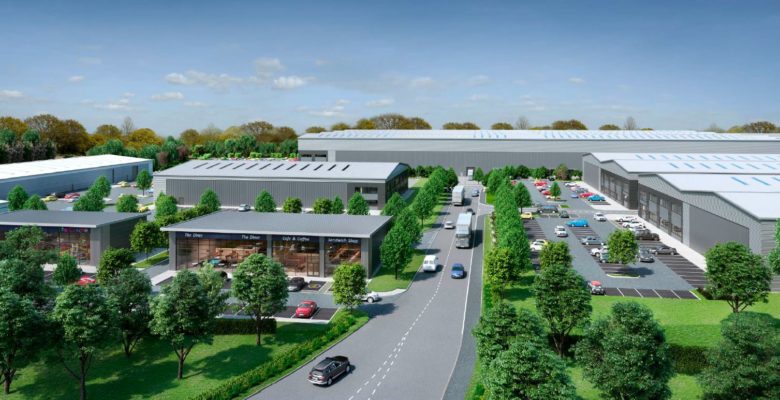 Quorum, the Wilmslow based commercial property developer, has submitted an outline planning application for Bredbury Gateway, a 76-acre site next to the existing Bredbury Industrial Estate.

Quorum estimated the business park would create more than 2,200 jobs once it completes, as well as creating 138 construction jobs.

The plans include for the development of more than 1.2m sq ft of industrial space over 15 separate plots with 25 units proposed across the whole site.

As first reported on Place North West , the units designed by architect AEW cover a wide range of sizes: the largest is planned for Plot 4 at 500,000 sq ft with two further plots hosting warehouses of more than 100,000 sq ft.

Other plots range between 60,000 sq ft and 15,000 sq ft, while some plots are subdivided into smaller units targeted at smaller businesses, taking up less than 10,000 sq ft each.

The £80m investment by Quorum has already been to consultation with public engagement held in June last year.

The developer said it had “spent considerable time and resource addressing the concerns raised” during this public feedback, particularly around mitigating the impact of additional vehicles on local roads.

In response, Quorum said it had “identified several points on the local highway network where it will fund significant improvements works to ease congestion”.

“The improvement works range from the introduction of signal controls to the addition of new lanes to manage the flow of traffic,” added the developer.

Landscaping and access featured in the plans include a 130-space car park for the nearby Stockport Sports Village, as well as a cycle link to and from the sport facility. The developer is also proposing a public footpath and bridleway between the site and the River Tame, as well as a landscaping scheme designed to “reduce the visual impacts of the development on the Tame Valley” and to “protect local wildlife,” according to the developer.

The site is allocated for employment use under the emerging Greater Manchester Spatial Framework; a further delay was confirmed to the GMSF earlier this month after first being reported in July.

The developer is targeting early 2020 for a decision by Stockport Council.

“Over the last two years, we have been approached by a number of potential occupiers interested in taking space at Bredbury Gateway. All of them have been unable to find development sites of suitable size and quality in Stockport to suit their existing and future needs.

“The lack of suitable options is now forcing occupiers out of the Borough, including a manufacturer, whose preferred location was Stockport, that has instead taken a significant site 30 miles away in mid-Cheshire. We therefore feel now is the right time to submit this application.

“This is a massive opportunity for Stockport to grow its economy whilst protecting and creating jobs for local people. Further, this is an opportunity for the Borough to deliver a high-quality logistics and manufacturing park, something it has not been able to do during the last ten years. This is a sector which has experienced significant expansion throughout the UK and Europe.

“Our planning application has been carefully considered, and the proposed off-site works will offer considerable improvements to the local highways network, along with pedestrian and cycle links to surrounding areas. The ongoing regeneration of surrounding areas, such as Brinnington, will be enhanced by Bredbury Gateway due to the easily accessible new jobs it will deliver. With this in mind, we believe that Bredbury Gateway will provide the final part of that jigsaw.”