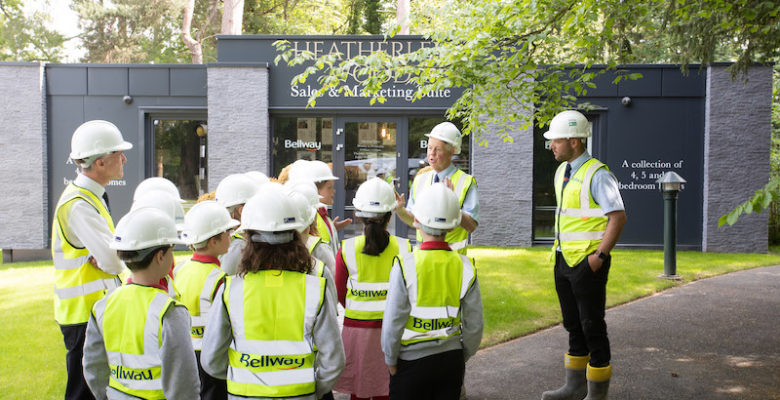 Pupils from Nether Alderley Primary School on Bradford Lane in Nether Alderley were treated to a taste of life on a busy building site when they visited Bellway Homes’ Heatherley Wood development at Alderley Park.

The informative and educational visit was undertaken by a mixed group of 15 pupils from Year 6 (age 10 and 11), along with the primary school’s headteacher.  The visit comprised a health and safety-focussed introduction to the residential development that is taking place at Alderley Park and an overview of the different job roles and processes that are needed for the construction of the new homes.

Accompanied by Bellway’s senior site manager Karl Henshaw, the children were then invited to don hard hats and high visibility vests and walk to the perimeter of the site.  Along the way, Karl stressed the importance of health and safety, highlighting the many dangers that the children would face if they strayed onto a working construction site, and gave the children plenty of opportunity to ask everything they had ever wanted to know about housebuilding.

Headteacher at Nether Alderley Primary School, Richard Craven, commented: “The visit to Heatherley Wood was a super experience for the children as they were able to gain an appreciation of the build process.  It was also very useful to highlight the many hazards on working developments, especially as this one is so close to our school.  We are very grateful to Bellway for facilitating this for us.”

Senior site manager at Bellway Homes, Karl Henshaw, added: “It was a pleasure to welcome the group to Heatherley Wood; the children were very well behaved and showed a real interest in the development taking place. I hope we’ve inspired some of them to consider construction as a future career once they leave school.”

Nestled away in Alderley Park, surrounded by mature parkland and trees, Heatherley Wood is a prestigious new development of 50 luxurious new build properties in an enviable semi-rural location close to open green space, water and woodland walks and trails that is within a five to 10 minute drive of Cheshire’s most sought after villages of Alderley Edge and Wilmslow and an easy commute to London in around two hours.

Featuring a stunning selection of four, five and six bedroom executive detached homes and a handful of stylish four bedroom townhouses, the development has set new standards in modern luxury living with all properties built to traditional high standards and featuring a magnificent specification.