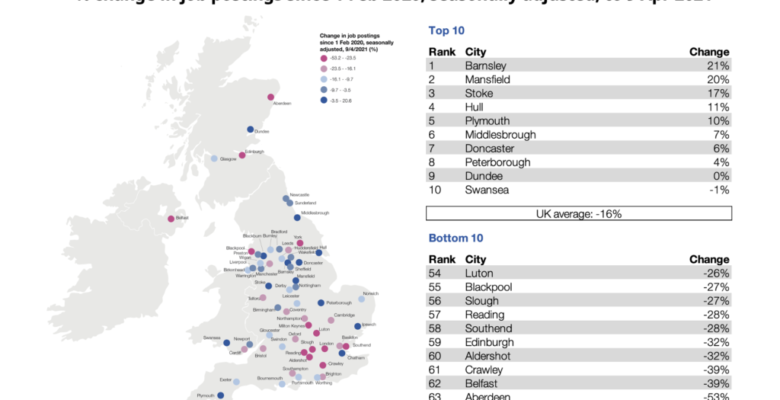 Research by the Centre for Cities think-tank, and global job board Indeed has found recovery in the UK’s jobs market following the pandemic is being led by towns and cities in the North and Midlands of England.

Indeed and Centre for Cities found that while hiring has gathered pace since the government’s roadmap out of lockdown was first published, recovery to the employment market has not been evenly spread throughout the country.

Th research analysed 63 towns and cities across the UK and found a clear North-South divide in job postings. Nine towns, all in the North and Midlands, were now seeing job postings exceed pre-pandemic levels. Cities and towns in the South East dominated the lower end of the table however, with Crawley, which relies heavily on Gatwick Airport for employment, the town in England to have seen job postings recover the least.

A sector divide also emerged in the data, with healthcare, distribution and manufacturing jobs all recovering faster than other sectors of the economy. These industries also account for a higher percentage of employment in the North and Midlands of England. Pawel Adrjan, head of EMEA research at Indeed explained:

As hiring activity picks up across the country it’s clear there is a two-step jobs recovery underway in Britain.

“Cities and towns in the North and Midlands that have been buoyed by rising manufacturing, distribution, healthcare and education jobs but at the same time areas reliant on hospitality, tourism and higher paying jobs that can be performed from home have seen only sluggish growth.

“Just nine urban areas out of 63 have back above their pre-pandemic level and while the partial reopening of the economy earlier this month rode to the rescue of many businesses and workers our research shows that it alone was not enough to lift ailing area’s jobs levels significantly.

“We’ve seen how quickly the jobs market reacts to policy and public health announcements and policy makers will hope the eventual unwinding of Covid-19 restrictions will help level up the jobs recovery.”

Elena Magrini, senior analyst at the Centre for Cities, said:

“Not everywhere is seeing yet the beginnings of post-pandemic recovery. Places reliant on tourism, aviation and office workers have been particularly hard hit and still have high shares of people who are unemployed or on furlough.

“Despite this, we have reasons to be optimistic, particularly given the pace of the recovery in the North and Midlands. Once we have reopened the economy, policy makers need to focus on building back better – growing the economy by creating better paid, higher skilled jobs for people right across the country.”