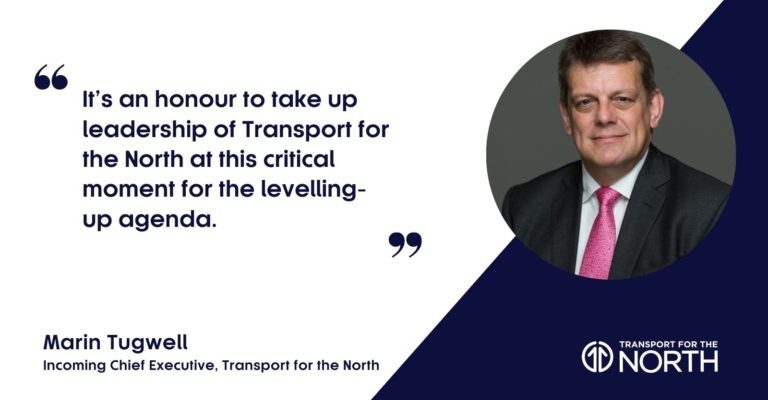 Martin Tugwell has been announced as the new Chief Executive for regional transport body, Transport for the North (TfN).

Martin Tugwell will succeed outgoing Chief Executive, Barry White, who will step down later this month, and act as a voice for the North’s civic and business leaders on transport investment. TfN’s Board approved the appointment during a virtual meeting on 16th April. Martin will assume his role this summer, with Northern Powerhouse Rail Director Tim Wood serving as Interim Chief Executive until then.

With over 20 years of senior leadership experience in the transportation sector, Martin also serves as the current President of the Chartered Institute of Highways and Transportation. He will join TfN from its counterpart organisation, England’s Economic Heartland, whose remit spans the corridor from Oxfordshire to Cambridgeshire in Central and South-East England.

Martin has an impeccable track record in both securing investment in transport and working very closely with elected and business leaders to bring about positive change. His passion and vision fit hand in glove with that of the North’s leaders, who work as one for the benefit of communities and businesses.

“We’re looking forward to TfN’s next chapter, as we carve an increased role for the North in decision-making and tackle the big challenges of our time such as decarbonisation and economic recovery.

“I’d also like to sincerely thank Barry White for his commitment to our shared vision and leadership of Transport for the North.”

“I can’t wait to work with the North’s ambitious leaders to drive real change in the region, making transport more accessible, inclusive and sustainable for future generations.”