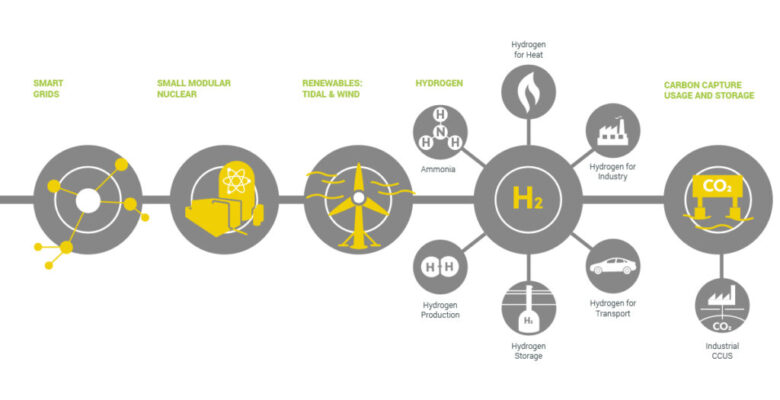 A prospectus published by Net Zero North West, an industry-led organisation guiding the region towards reducing CO2 emissions, has showcased green investments being made into low-carbon projects in the region.

The report, produced by Siemens UK analysts, highlights 18 investment cases for projects totalling £207 billion in the that demonstrate the North West’s capabilities for spearheading the UK’s ‘green industrial revolution.’ The region has ambitions to be the first in the UK to achieve net zero carbon emissions by 2040. Projects underway to meet net zero targets include a net-zero industrial cluster, and clean energy projects providing tidal power, Liguid-Air Energy Storage and hydrogen production and storage facilities, and could also support over 600,000 jobs, bringing £285 billion to the UK economy.

“We’re already seeing this investment flowing, with government funding of £33m for hydrogen and carbon capture in the region and just this week, Vauxhall announced a £100m investment to build electric vehicles at Ellesmere Port.

“It’s clear that if you think Net Zero, you think North West and I’m delighted to be a part of this special launch event and discuss the region’s prospects.”

The North West is the only UK region that has everything required to deliver the UK’s first net zero region by 2040. There is no question that we have the vision, geography, expertise and infrastructure to deliver. Our strength lies in the unrivalled number of projects already happening on the ground, across hydrogen, renewables, carbon capture, nuclear and more. Working with Government, we are committed to real change that will not  only level up the country but is critical to reaching the UK’s net zero targets. Now is the time for action and this prospectus sets out how we will deliver.”

Securing an inclusive and sustainable economic recovery is at the heart of the long term vision for Cheshire and Warrington. Action, innovation and leadership by industry, supported by Government and the wider public sector, is going to be key in decarbonising our economy and maximising the local benefits and wider economic opportunities of this. This region has a strong and proud track record of collaborative working and we intend to build on these powerful partnerships to ensure we are the catalyst for sustainable growth.”