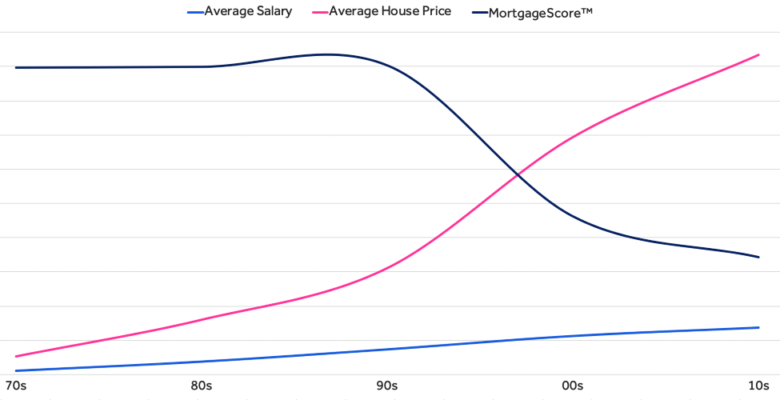 Macclesfield based digital broker Mojo Mortgages has revealed how the affordability of homes has changed over time with the launch of a new free tool for home buyers, MortgageScore.

MortgageScore is a free service, allowing buyers to assess their likelihood of getting a mortgage, using their circumstances including salary, household debt, disposable income to generate a score out of 1000. The product also provides advice to help would-be buyers improve their scores and helps to create greater transparency in how lenders make their decisions.

As part of the service launch, Mojo Mortgages input average details of a first time buyer and property prices from the 1970s, through to the present day to see how the market has changed for first time buyers over the years.

The analysis highlighted the challenges millennial first-time buyers have compared with their Baby Boomer parents who bought their first homes in the 1970s and 1980s.

Mojo Mortgages also revealed how house prices have risen from the 1970s, with first-time buyers needing to borrow 18 times more now compared with the 1970s. Property prices have increased 1661% since the seventies, however salaries haven’t kept pace, with the average first-time buyer four years older today, than in the 1970s.

Homeownership is a top life goal, but for many first time buyers these days, it’s something they feel they won’t be able to achieve anytime soon. This data proves the fact that being a first time buyer in the 1970s, 80s and 90s was really the best time to purchase a house, while those who have tried to purchase in the last five years haven’t even been near eligible when looking at their average mortgage score.”

“Combined with property inflation, high rents and the rising cost of living, there’s also a serious lack of transparency in the homebuying market. When first time buyers are rejected for a mortgage, in many cases, they aren’t given a reason as to why. There’s a serious lack of transparency in the market, and if young people knew lenders would assess their disposable income, they would probably take steps to boost it in order to be accepted for a mortgage.”

More in-depth data is available on the Mojo Mortgages website.