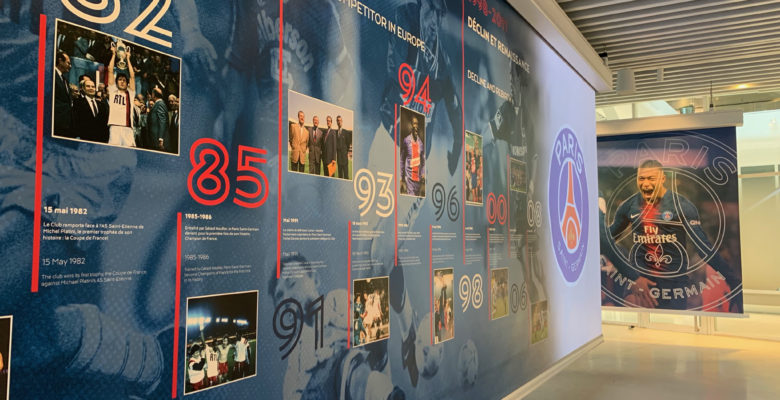 Paris Saint-Germain (PSG) football club has this week unveiled its new ‘PSG Experience’, with the help of design specialists at Mather & Co.

The new experience aims to offer fans of the Club, and the game, a behind-the-scenes look at Parc des Princes, where they can engross themselves in everything the hallowed ground has to offer, from visiting the changing rooms to virtually flying over the stadium.

The experience on offer represents a global first for a football club, built on the latest virtual reality and immersive video technology, and is made up of three different parts: PSG Stadium Tour: A Reinvented Stadium Visit, History Room and PSG VR Arcade: A First for a Football Club.

“Our supporters have been eagerly awaiting these Parc des Princes tours, as have the millions of tourists who visit the French capital every year.

“In line with the Club’s ambition, we took our time to build a project that exceeds their expectations, in order to offer an interactive and immersive experience that is the only one of its kind in the world. We want to make the Parc des Princes a must for tourists in Paris, as well as the Eiffel Tower or the Louvre.”

Mather & Co, a firm that specialises in museum, leisure, retail, entertainment and sports stadium experiences, was tasked with creating a new History Room, which celebrates the most magical moments in the Club’s rich history, along with some of the legendary faces that graced the pitch.

The North West-based design consultancy worked in partnership with the cinematic group mk2, which has a wealth of experience in creating impactful cinematic experiences in unique environments across Paris, and was selected due to its experience in delivering world-class sports stadium experiences and museums.

“We’re delighted to be part of such an amazing project in the sporting world. It’s the first time we’ve worked on a project of this type in France, which makes the PSG Experience even more special to our team.

“Since work started in March, we’ve worked hard to make the History Room a truly immersive experience that offers PSG and football fans alike a glimpse into the spectacle behind this great Club. Moreover, it couldn’t have been a more exciting time, as female teams from across globe descended on France as part of the FIFA Women’s World Cup.”

An immersive six-screen largescale audio-visual experience is also something not to be missed. This art-piece immerses people in all aspects of the Club, from the players to the matches, to the fans and its place in the wider city. It uses state-of-the-art projection and an all-enveloping sound design, to give fans an authentic experience.