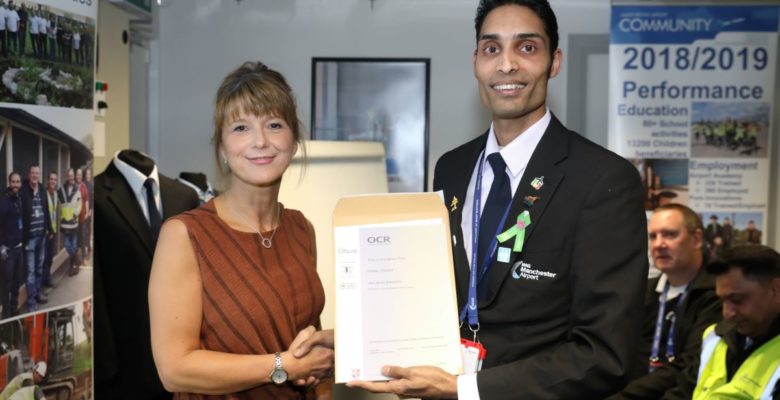 Team members obtained qualifications in Customer Service and Team Leadership, in the first programme of its kind at the airport.

Manchester Airports Group began the programme at the Airport Academy in 2018, as part of a £130,000 investment in training. Applications from staff came from departments including Landside Operations, Terminal and Airfield Security, Car Parking, Forecourts and the Emergency Services.

Certificates were presented to graduates in a celebration including commemorative cakes, and a speech from Manchester Airport’s People Director, Rachael Minnis.

Vishal Trivedi was among the employees to attain his NVQ in Team Leadership in an intensive two week programme. The Security Performance Team Leader said:

I decided to take the course to challenge myself and improve my own abilities. It is great to be working towards something tangible and the Airport Academy offers that opportunity. The course helps you communicate on all levels and provides you with strong interpersonal skills which can be used anywhere.”

Dominic Sagar achieved an NVQ in Customer Service, while in the position of Security Operations Manager. Having encouraged his team to join him in participating at the Manchester Airport Academy, he has since taken what he learned into a new role as Resilience Manager. Dominic said:

Our terminal teams had already adopted the NVQ programme and I saw a lot of value in it for our airfield security team.

“It offered a good opportunity to further develop skills that we already use day-to-day, gain recognition for them and we now have the chance to work towards the higher Level 3 and Level 4 qualifications.

“The skills learned by the team will hopefully translate into a better experience for our guests overall.”

The Airport Academy is a real success story and this is the latest example of the difference it makes, both to our own staff and to local people seeking work.

“These employees now have a nationally-recognised, transferrable qualification that will not only enhance their career prospects but has also helped them develop key skills, which colleagues and passengers alike will benefit from.”

Established in 2004, Manchester Airport’s Academy provides training to staff and also offers a route into employment for those from disadvantaged backgrounds across Greater Manchester, including the long-term unemployed and those without formal qualifications.

Courses are delivered by Trafford College Group, equipping these candidates with the skills they need to find work at the UK’s third busiest airport. More than 400 current members of staff working at Manchester Airport, either employed directly or by third parties, secured their roles after gaining a qualification from the Academy.