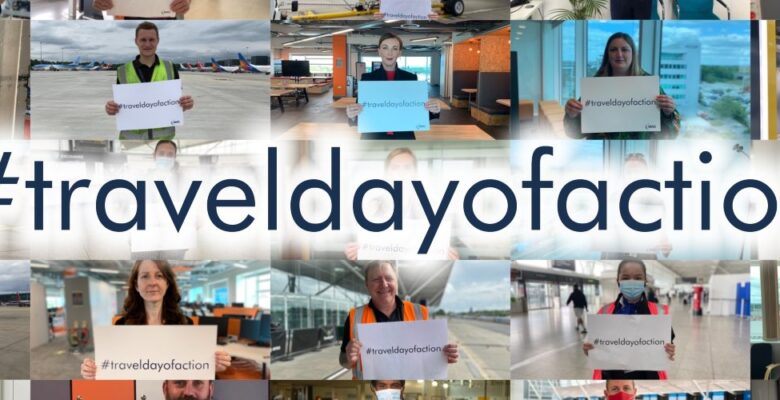 Colleagues at Manchester Airports Group (MAG) – the UK’s largest airport group – will mimic a pre-pandemic day of flying on social media, as part of a nationwide day of action from the travel industry in response to the government’s handling of international travel.

Staff at all three MAG airports – Manchester, London Stansted and East Midlands – will post pictures of themselves on Twitter, to mark every single flight that would have taken off on 23rd June 2019.

Colleagues at all three airports are supporting a national day of action – coordinated by aviation and travel industry trade bodies – to protest against the lack of support from government on the re-opening of international travel. The protest comes following analysis by pilots’ union BALPA which shows that the UK’s aviation sector has been the worst affected by the Covid-19 pandemic in Europe. London Gatwick and Manchester airports have seen the greatest percentage fall in flights across the continent when comparing 2021 and 2019 schedules.

Along with the social media campaign from MAG colleages, trade union Unite has organised a socially distanced protest at the Northern hub, beginning at 12.30pm, joined by pilots’ union BALPA and other travel sector organisations. Staff from London Stansted Airport will join in a march on Westminster, while protests will also take place at other UK airports including Edinburgh, Belfast and virtually at Cardiff Airport.

“Aviation has been the sector hardest hit by the pandemic, yet government does not seem to appreciate its economic value or trust its own system for the restart of international travel.

“Despite holding back the recovery of an industry that supports more than 1m jobs, and generates billions of pounds of value, there has been nowhere near the level of support offered to other parts of the economy.

“The whole of the travel industry recognises the need to protect public health and has supported every measure government has required in response to Covid-19.

“However, with so much at stake, it is simply unacceptable that government refuses to explain why it is not opening up travel to many popular destinations.

“Together with airlines, we have been left with no option but to challenge the Government’s lack of transparency, and to protest against the stifling of our recovery through this day of action.”

The UK aviation industry is the hardest hit in Europe, caused by the UK Governments ludicrously cautious restrictions on international travel. Hapless Ministers give all the appearance of deliberately attacking aviation and tormenting the public with their mixed messages over summer holidays. BALPA is demanding that the UK Government gets its act together and opens the US routes and European holiday travel destinations that it has blocked with no published evidence at all.

“If the country is going to build back better from the pandemic and build new international links with partners for trade and travel, we are going to need a thriving aviation industry. There is no time to hide behind task forces and reviews. This week pilots will be calling on the Government to act now to save jobs by taking a transparent, evidence-based approach to travel restrictions, extending the furlough scheme and helping airlines and airports weather this storm through direct financial support.”

The travel day of action comes after MAG and Ryanair launched a legal challenge, supported by a number of major airlines, against the government’s lack of transparency when making decisions about the countries categorised as red, amber or green in its traffic light system.