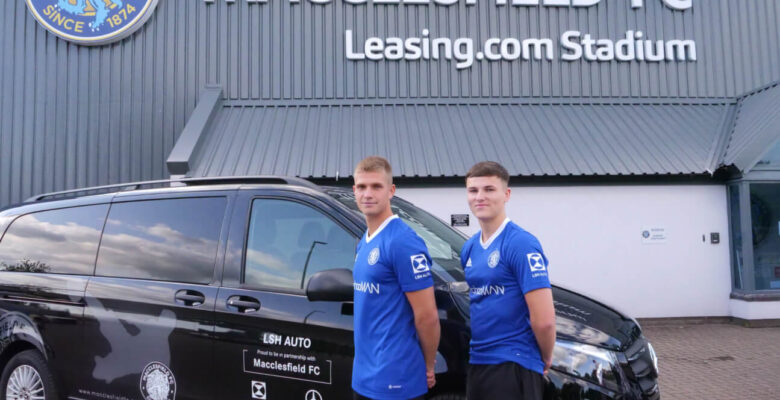 LSH Auto and its local dealership Mercedes-Benz of Macclesfield, will again be the ‘Official Van & Car Supplier’ to Macclesfield FC for the coming 2022-23 season.

In addition, a range of vehicles have been used by staff for events and meetings, from the Mercedes-Benz A-Class to the all-new Mercedes-Benz EQC.

“We’re looking forward to continuing to support our local club. Our partnership with Macclesfield FC has been going from strength to strength over the past 18 months and so has the Club’s success. The Men’s First Team won the NWCFL by fifteen points and were promoted, the Women’s First Team were league champions, membership of the Club’s Academy has exceeded 600 male and female players and the Under 16s team won the league championship, the Cheshire County Cup, the Primary Cup and the Manchester FC County Cup.

“From transporting equipment for grassroots training and community events, right through to transporting the first team players, we’re really pleased that our Mercedes-Benz vehicles are supporting the growth and success of the club.”

As a key sponsor, LSH Auto will also have its logo featured on the arm of the new Macclesfield FC kit and a number of advertising boards around the ground.

“I’m delighted to be renewing our partnership with LSH Auto for the season ahead. They are the main transport provider for the club and it’s great to have them on-board.”

With Mercedes-Benz dealerships in the North West and the Midlands, LSH Auto offers all-new models from the Mercedes-Benz and smart car collection, premium approved used vehicles and aftersales services including maintenance, repairs, servicing, parts and accessories.