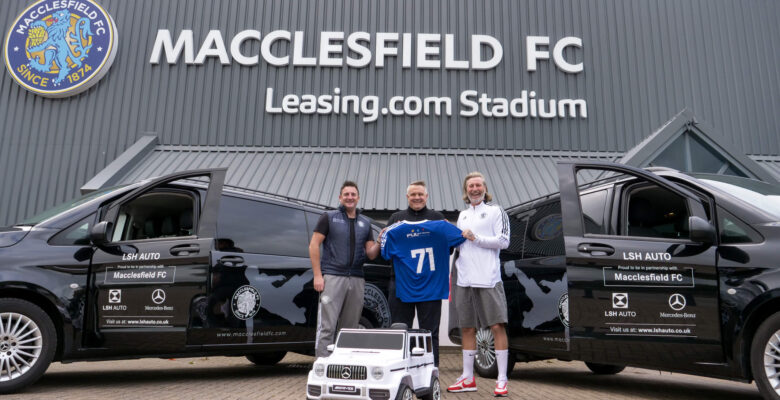 To mark the club’s one year anniversary, its official van and car supplier, LSH Auto, has given the club a licensed Mercedes AMG G63 12V kids’ electric car, enabling the Macclesfield FC’s match ball carriers to travel onto the pitch in style.

The tiny electric vehicle is the latest addition to the club’s luxury fleet of vehicles from the LSH Auto team at Mercedes-Benz of Macclesfield.

LSH Auto was first announced as the ‘Official Van & Car Supplier’ to Macclesfield FC in December 2020, just two months into the club’s journey to rebuild and start again.

Since then, the club has grown to include 29 football teams and an academy, with 75 staff, including 25 full-time coaches as well as a gym, a bar and a 4G pitch. With its first team now topping the North West Counties League and regularly attracting an average attendance of 2,678, the club’s future is looking bright again.

“We were so pleased to welcome LSH Auto as one of our sponsors back in December and we’ve been putting our Mercedes-Benz Vito Tourer Vans to good use at all levels since then, from transporting the first team, to being used for some of our grassroots and community initiatives.

“Kids are a huge part of our club. We have 365 youngsters aged 7-16 playing football here, and we want to encourage even more families to get involved, so I think the tiny Mercedes-Benz is going to be a brilliant asset to the club.”

“Giving back to the communities that support us is one of our core principles. We’re delighted to have played a small part in the success of the club in its first year and we look forward to continuing to support Macclesfield FC on its journey.”