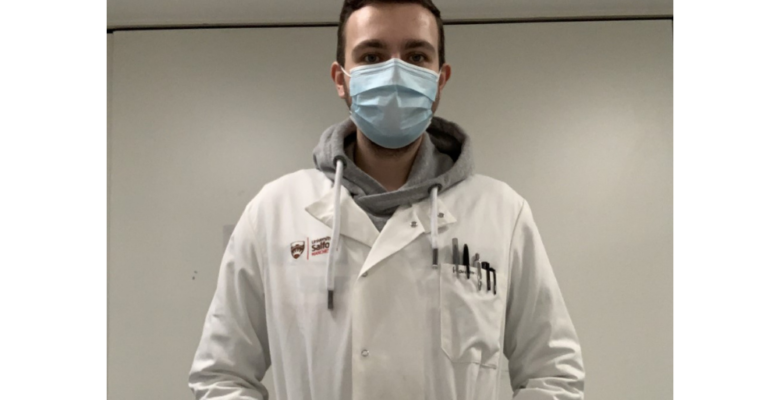 An apprentice working at the Lighthouse Lab coronavirus testing facility in Alderley Park has been recognised in his college’s annual apprenticeship awards.

Lab technician, Harrison Bennett was praised by Stockport College’s annual Apprenticeship Awards for his efforts in tackling the spread of the coronavirus.

Harrison’s skills were called upon to help process thousands of Covid-19 PCR tests for Medicines Discovery Catapult at Lighthouse Labs at the former AstraZeneca campus near Alderley Edge. When he didn’t have his arms inside a biological safety cabinet testing vast numbers of samples, Harrison was gaining experience at the teaching laboratories of the University of Salford while studying for an NVQ Diploma in Laboratory and Associated Technical Activities (LATA) with the College.

“It was incredibly rewarding being able to play a part in helping combat the spread of the virus, it might have involved getting up early in the morning to travel to the testing site, but the job felt really felt worthwhile.

“My apprenticeship really opened my eyes to the world of science and the lines of work people pursue. I really enjoyed coming into College to learn techniques I hadn’t encountered before. It was a great place to gain the knowledge and skills I was able to apply to my workplace during my apprenticeship.”

Harrison, who also studied A Levels with the College Group, received the overall achievement award as well as a certificate for Lab Technician Apprentice of the Year, which he can add to a trophy cabinet already containing an outstanding apprentice award from the Institute of Science and Technology, presented by Britain’s first cosmonaut Helen Sharman in 2019.

The rising star is now working full time at the University of Salford while studying for a degree in chemistry and scored an impressive 95% on his first assessment.