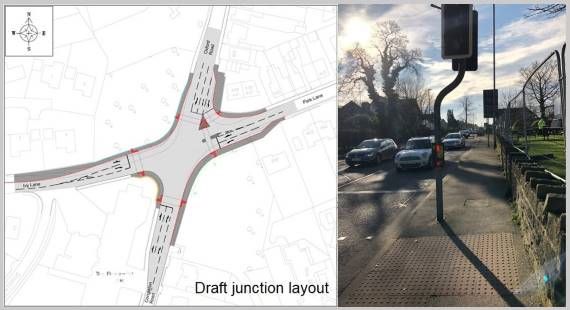 Cheshire East Council has revealed plans for improvements to the Flowerpot Junction (where the A536 Congleton Road/Park Lane, the B5088 Oxford Road and Ivy Lane meet) in Macclesfield, with a consultation launched on the £5 million scheme.

The scheme was given the go ahead by Cheshire East Council in March this year and residents are now being invited to take part in an online survey ahead of the final plans being drawn up. The consultation on the plans will run until 25th July 2021.

Proposals for the junction, one of the key routes into Macclesfield town centre, will include dedicated turning lanes and improvements to pedestrian and cycle crossings. Work on the Flowerpot Junction is set to begin in 2022 and take approximately six months to complete.

The Flowerpot Junction is a key route into the town centre and, particularly at peak times, is also an area that experiences high levels of congestion.

“This scheme will increase capacity at the junction to ease existing levels of congestion and ensure that the road network is able to cope with any further demand as a result of planned developments around the town.

“Making investments in this part of the network will also support active travel – a key aim of the council’s corporate plan.”

The £5 million scheme will be funded from a mixture of government grants, developer contributions, and the council’s capital budget.

During the development of our plans for the Flowerpot Junction we received feedback from residents and other stakeholders and have made changes where possible, including some suggestions to improve the junction for pedestrians and cyclists.

“Now, as we get closer to beginning work on this junction, I’d like to encourage people to respond to our online survey so that they can share their views and help us to move forward with the best possible scheme.”

Further detailed plans for Flowerpot Junction improvements can be found on the Cheshire East Council website. Residents can also share their views on the proposals here.