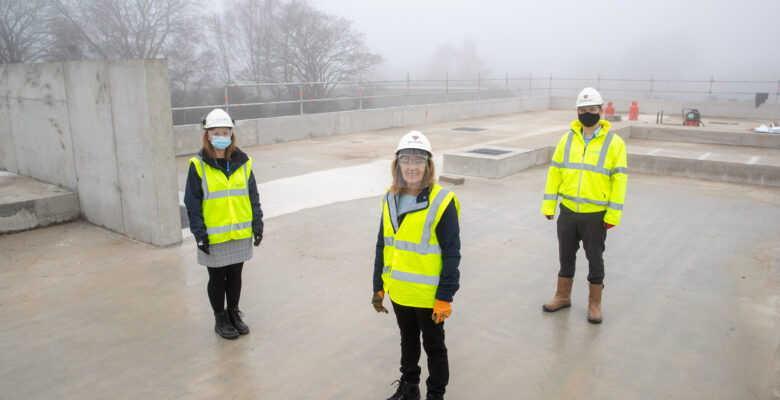 A major milestone has been reached in the construction of The Christie at Macclesfield cancer centre.

The structural frame for the new £26 million cancer centre has been completed and the project has reached its highest point in the construction process.

Lorraine Johnson, a Christie patient and fundraiser from Macclesfield, was invited to view the progress being made on the cancer centre, which will open to patients in December 2021.

She was joined by Darren Bugg, head of capital at The Christie who is overseeing the construction project and by Louise Dawson from The Christie charity, which needs to raise £23m towards the £26m project.

Lorraine was first diagnosed with breast cancer in 2008 and had treatment. Sadly, during a routine scan in 2018, she found that she had secondary breast cancer in the bones of her spine. This has also recently spread to her lungs.

She had worked at the Broken Cross Club in Macclesfield but retired last year. The club has already raised more than £2,000 towards the new cancer centre.

Along with her friends and former colleagues at the Broken Cross Club in Macclesfield, Lorraine is hoping to be able to do more fundraising for the new centre once the COVID-19 lockdown restrictions are lifted. She said:

I am thrilled to be invited to mark this important point in the building of the new cancer centre. A lot of work has been done since last summer when the site was flat. Having looked at what The Christie is planning to do here, the new facilities look superb.

“The Christie at Macclesfield will make a huge difference to patients like me and others who follow. Being treated in Macclesfield, rather than having to travel to The Christie in Withington, will be less stressful and time consuming for patients. It’s a fantastic project and I hope that more people will help with the fundraising this year.”

The Christie at Macclesfield will transform cancer care in Cheshire, the High Peak area of Derbyshire and parts of North Staffordshire, providing care closer to home for more than 1,500 existing Christie patients a year.

It will bring together essential cancer services into one purpose-built centre delivering local specialist access to radiotherapy, chemotherapy, holistic support and information services, outpatient care, palliative care and a wider range of clinical trials. Around 40,000 appointments per year will take place at the new centre.

We are delighted with the progress that is being made building The Christie at Macclesfield. The new centre will deliver cancer care to the highest Christie standards, but closer to where patients live. Many patients currently travel to The Christie in South Manchester, putting tremendous pressure on them and their families at an already stressful time. The Christie charity is raising £23m for this vital project.

“As a charity, we have been hit hard by COVID-19. The loss of income directly impacts the support we can offer the hospital. We have never needed our supporters more – each and every penny raised makes a difference to patients like Lorraine and thousands of others. Cancer doesn’t stop for a pandemic.”

For details of how you can support The Christie at Macclesfield fundraising appeal, visit the charity’s website.

The Christie charity supports the work of The Christie NHS Foundation Trust providing enhanced services over and above what the NHS funds. This includes money for care and treatment, research, education and extra patient services. Gifts from the public make a huge difference to the care and treatment that The Christie is able to provide to patients and their families.

The Christie NHS Foundation Trust was the first specialist trust to be rated as ‘Outstanding’ twice (in 2016 and 2018) by the health regulator the Care Quality Commission (CQC). It referred to The Christie as ‘a leader in cancer care’ and ‘a pioneer in developing innovative solutions to cancer care.’ The CQC praised the Trust’s staff which it said ‘go the extra mile to meet the needs of patients and their families’ and that they were ‘exceptionally kind and caring.’ In 2017, the CQC rated The Christie as the best specialist trust in the country, and one of the top three trusts overall in England.