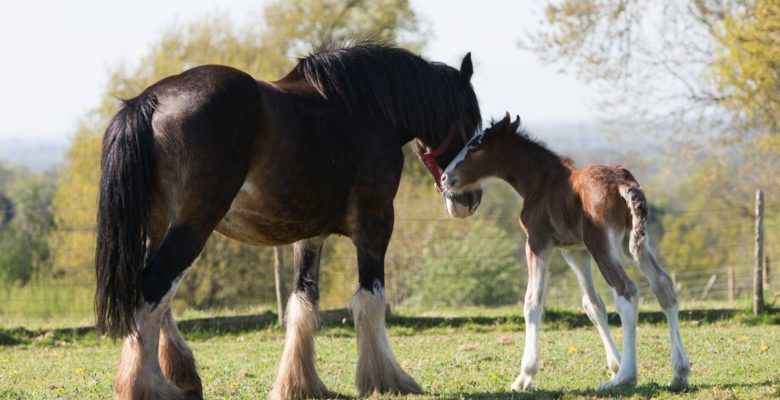 Stockport-based Robinsons Brewery have announced the birth of a foal at Nether Alderley as part of their Shire Breeding Programme.

The birth comes almost a year after the first foal was born through the brewery’s Shire Breeding Programme.

The brewery brood mare, Horsemans Princess Giselle, has given birth to the brewery’s second foal. Hillgate Brigadier Biggins, or “Boris” as he will be known, was born on Friday 17th April at 8.30am. Both mother and foal are happy and healthy.

Robinsons has been passionate about Shire horses since the beginning of their business time. In their heyday, before the arrival of the internal combustion engine, they were in the main brewery yard working every day to deliver traditionally brewed ales to local inns and hostelries.

Hillgate Brigadier Biggins was born in a family-owned field in Nether Alderley.  He was discovered by Georgie Robinson after a quick birth and now receives visits from the 5th, 6th and 7th generations of the family brewer, who live locally, as part of their daily exercise.

Helen Preece, Head Horseperson at Robinsons Brewery who has been working with Shire horses at the brewery for 20 years since joining aged 16, explained:

Hillgate Brigadier Biggins is our second foal to be born following the launch of our own Shire horse breeding programme and is a fantastic strong colt foal with four white legs and unusual face marking.  He was up on wobbly legs within half an hour and looking for the milk bar!

“Following Hillgate Henrietta-Anne’s birth last year, we registered our own prefix, ‘Hillgate’, with the Shire Horse Society; which all future foals will inherit- hence the inclusion in Brigadier Biggins name.  I’m sure some will assume the “Boris” nickname has some connection to the Prime Minister, but the reality is that we went for it because it rhymes with his mother’s nickname, Doris.

We are proud to be preserving and promoting the Shire horse breed and the team and I are excited to welcome the special new edition to the family.”

Due to the current COVID-19 crisis the Shire horses are being kept in a local field and so cannot be seen at the brewery.  But to stay updated with the latest news on the foal just follow Robinsons Shire Horses on Facebook here.