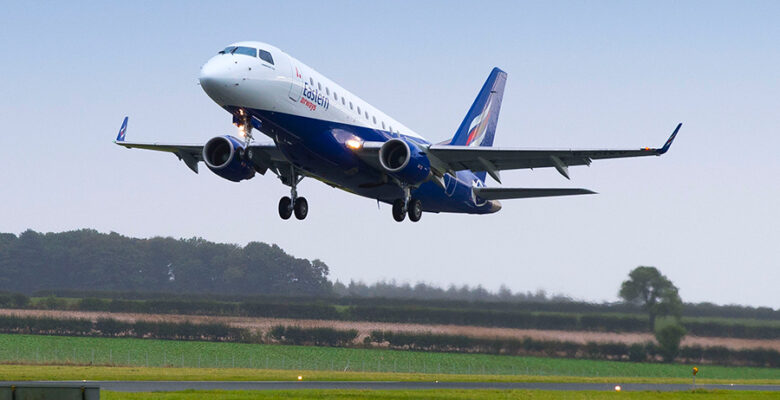 The Humberside based airline, which already operates flights to Southampton from the Northern hub, will introduce to flights to Cornwall to coincide with the start of the half-term holidays, giving those looking to stay in the UK for their break an alternative to the seven hour drive or train journey to the South-west region.

Eastern Airways will operate four flights a week from Manchester to Newquay, increasing to a daily service in the summer season. Scottish airline, Loganair, have also this week announced plans to provide a seasonal service from Manchester Airport to Newquay, with flights expected to start from 28th March 2021. Previous links between the Manchester and Cornwall Airport Newquay were severed earlier this year following the collapse of Flybe.

As the UK’s regional airline serving all four home nations, our ethos is to connect people and places, especially from regional airports throughout the UK which includes services to primary worldwide connecting hubs. This third Newquay service does exactly that, linking the South-West and especially Cornwall with Manchester, one of the UK’s major hub airports. We have carefully one-by-one added former flybe routes that we know are sustainable and where local support is positive and strong. The addition of Newquay from Manchester complements our existing Southampton. The frequency and capacity will increase as demand dictates and especially as travel volumes return through into summer next year.”

It’s great to see Eastern Airways commence a service to Newquay from Manchester Airport, providing vital connectivity between the two regions and beyond. With a host of safety measures in place, the security of all our passengers and staff continues to be our number one priority, as we connect people to places domestically and internationally.”

This announcement by Eastern Airways of a third new route to Cornwall Airport Newquay from Manchester is fantastic news. It demonstrates a real vote of confidence in our region and of the potential for domestic air travel to continue its recovery.”