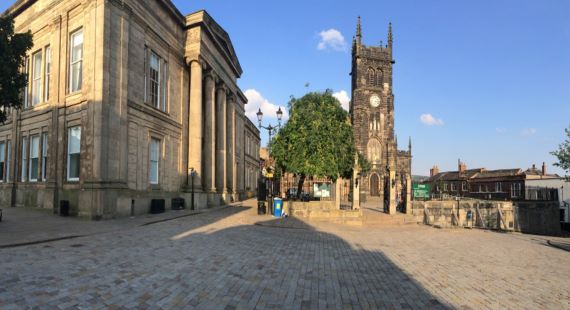 Cheshire East Council has revealed it has placed three bids to the government’s Levelling Up Fund to invest in projects in Crewe and Macclesfield town centres.

The council has bid for funding for improvements to public space in Macclesfield town centre, taking in Chestergate, Market Place, Exchange Street and Mill Street.

The project – supported by MP David Rutley, Macclesfield Town Council, Grosvenor Centre owners Eskmuir and Make It Macclesfield – would transform the look of the area and focus on the pedestrian, rather than the vehicle.

It would see pavements widened to create more scope for existing and new cafes, bars and restaurants to have al fresco seating areas, encourage more people to cycle into the town centre, and include adding more greenery and improving street furniture.

“The plans have the potential to make a real difference to a core area of the town centre and aim to build on the transformational works completed in Castle Street last year.

“The scheme incorporates the area at the back of the current Marks and Spencer store, to make the unit more desirable for new occupiers.”

In Crewe, the council is hoping to secure funding for two pedestrian and cycling schemes around Crewe Station. The town is also among a number of places nationwide being considered to be the home of new rail body, Great British Railways, following a bid by Cheshire East Council.

“We are confident that we have put forward three compelling bids, which present the strongest options in meeting the full criteria of the Levelling Up Fund.

“However, we recognise that the government also prioritises authorities based on need, and that Cheshire East has unfortunately been classified as a ‘priority three’ authority – the lowest need classification for this Levelling Up funding.”

A decision on the bids is expected in the autumn.