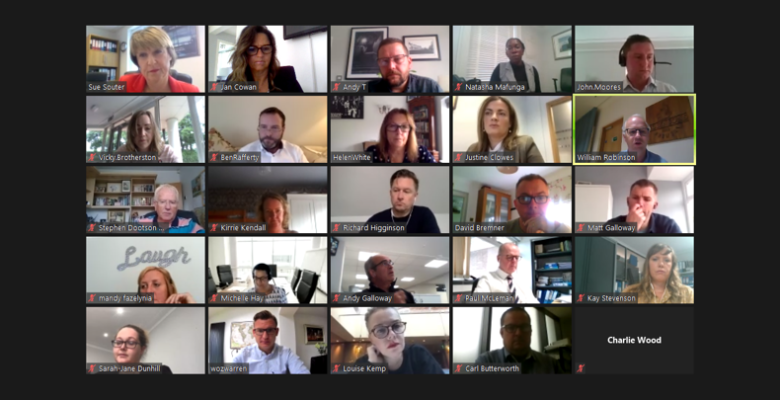 Building consumer confidence and taking advantage of new tech: those were two of the key take outs from the latest online networking session from the area’s newest business connections and publishing organisation, Marketing WAM which was focused on the returning hospitality sector after a devastating four months.

They were joined by Jo Wise, Development and Regeneration Delivery Manager from Cheshire East and numerous members from both Marketing Stockport and Marketing WAM organisations.

Building consumer confidence in the pub experience was central to what William Robinson had to say, who is currently supporting the reopening of Robinsons pub estate in England and, in time, Wales. He preferred to describe Super Saturday as Safe Saturday, which better reflected the mood and attitude of licensees.

Their sole focus was to make it as safe and comfortable as possible for customers without ruining the usual pub atmosphere. I am pleased to say the customer feedback to their efforts has been very positive.  Customers loved being back in the pub and we saw a younger demographic in general – keen to be out.”

When asked about pubs closing again after an incidence of Covid-19 in other parts of the UK, William commented on their speedy actions.

They shut their doors immediately, contacted people and went public to say to that they had done so. That was the right thing to do. Take complete responsibility. Knowing pub landlords will react positively will reassure consumers and help us build that all-important confidence.

“We are now looking to government to continue and increase help for the industry probably beyond 2020-21. I think we will need things like business rates support well into 2021-22.”

On localised support Jo Wise from Cheshire East reminded hospitality and retail business owners about forthcoming deadlines this week re on applying for discretionary grants, no later than 8am on Friday July 10th.

John Moores, who looks after seven food outlets on Bruntwood’s Alderley Park site, said he had seen hospitality reduced to nil at the site.

Conference centres closed, office workers at home, there has been very little going on.”

Referring to a recent Sodexo customer insight report John echoed the views of William Robinson saying that confidence in the catering operation – both from workers and user perspectives – was essential. He said;

Recovery of future footfall across the site as restrictions lift, will be entirely dependent on good food service worker training and regular, sustained communication of actions to customers and the general public.”

Jo Wise gave an update on the Business & Planning Bill currently going through parliament to cut red tape and cost on application for use of pavement and other outside space for alfresco dining which should be through into law at the end of July.

There will be a simpler application process, a 14 day response deadline for us and a much cheaper one off £100 fee to get it done.”

Andy is also campaigning for a new rotational Pop Up hospitality event in Macclesfield town centre on a regular basis so local outlets who have seen very little trade can literally pitch up and sell produce. He commented:

The idea is under discussion with Cheshire East and would be a great lift for hard-pressed business owners.”

Louise Kemp, who spoke on behalf of the Core Collective, a set of hospitality support service specialists working in Macclesfield, said they had responded the needs by providing good advice FOC under a campaign called Reset to Restart. She said:

Now is the time to pull together and give struggling folk a leg up.”

Business owners who had ventured into pubs and restaurants over the weekend with some trepidation had been pleasantly surprised. Matt Galloway of Galloway’s Printers in Poynton commented:

It was well organised and felt perfectly safe.”

In response to questions over some outlets not opening and delays, William Robinson said supply chain issues would hold some people up.

Full delivery from scratch, especially around fresh food produce, is going to be a challenge for many for a while. And some people are just watching the experience of others before opening their own doors. It’s an individual decision.”

Embracing the ordering of drinks via an App was another new challenge for people with mixed results. Marketing WAM Publishing Director Sue Souter said:

Technology-wise we have moved 10 years in 10 weeks – there are bound to be glitches – but it could be a long-term positive.”

Euan Stubbs, a digital specialist from White Noise, agreed. He said that technology now playing a role would be good for smaller outlets traditionally reliant on passing trade.

Can you imagine having the security of being fully booked? This is a new reality to be embraced.”

Carl Butterworth, General Manager of Holiday Inn Express in Stockport, who has been open throughout the pandemic – mainly for key workers, said that things were starting to pick up again.

Family and friends are arriving to see loved ones now they can and I think smaller town hotels will do better than big city centre ones initially for this type of trade.

“We have a lot of new cleaning and distancing procedures in place and the breakfast buffet has been swapped for a ‘bagged breakfast’ with a hot roll, which people are fine about.”

There was talk from business owners around reduced office occupancy having an impact on hospitality outlets close by. John Moores commented:

We only have 30—35% occupancy at Alderley Park at the moment. Kirrie Kendal from Astra Zeneca, Macclesfield with 4000 people normally on site said it was harder to bring people back in than send everyone home. “We have 1600 in critical product roles still on site, but we are being incredibly cautious about bringing others back.”

I would say there is huge pent up demand for that old face to face contact. Coffees and business meetings in favoured venues is something we are all looking forward to.”

Marketing WAM’s next Zoom meeting is July 29th at 10am and will look at the green revolution – how we can come back to business greener and in more sustainable ways. For details of how to join the session please email Jan Cowan.