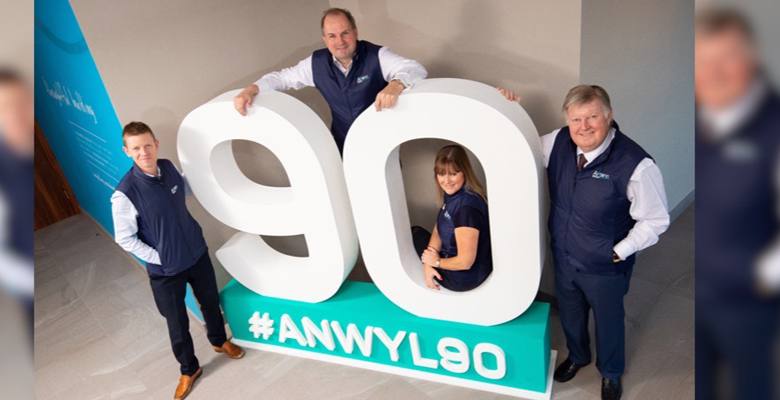 Housebuilding and construction company, the Anwyl Group, turns 90 years old this year. Anwyl is behind the new residential development, The Fairways, coming soon to Handforth.

To mark the milestone, the housebuilder has a series of 90-themed community and charity donations planned during its anniversary year. At the heart of everything planned, Anwyl will reinforce its commitment to giving something back to the communities in which it builds.

Starting immediately, the group has pledged to donate £90 for every new home sold during 2020, donate 90 dog beds to the Dogs Trust, install 90 bird boxes across its developments, and deliver 90 Easter eggs to hospitals and care homes. Anwyl’s aim is to make one 90-themed donation every month during 2020.

It is estimated that more than £50,000 will be generated as a result of the initiatives that will go directly to helping charities or good causes in the North West and North Wales.

Established in Rhyl in 1930, the company began life as a joinery contractor and has since grown to become one of the region’s leading house builders and contractors with solid values centred around quality, collaboration and continuous improvement.

Now managed by the fourth generation of the Anwyl family, the Group collectively employs more than 200 people and is made up of three divisions; land promotion business Anwyl Land, specialists in affordable housing, extra care and land and build developments Anwyl Partnerships and residential developer Anwyl Homes which has developments across south Manchester, Cheshire and North Wales and recently expanded with the launch of a new operating region Anwyl Homes Lancashire that has its own dedicated office in Chorley.

The company was founded in 1930 with a partnership between my father and grandfather and we have worked hard to grow the business and manage its evolution into the modern and dynamic company that it is today. It is with great pride that I continue in the role of chairman, working with my children and our loyal employees to ensure the business remains a key player in the industry for the next 90 years and beyond.”

We are extremely proud of the business that we have created, and the quality of our award-winning new build homes.  It is thanks to the continued commitment of our talented team and full support of our banking partner, we are in a great position to celebrate this important milestone and go forward and achieve the goals that we have set for the next few years.”

The company has undergone significant expansion in its 90-year history and we are particularly proud of the evolution of the Partnerships team.  The division has developed solid partnerships with valued clients and its supply chain to create sustainable communities and bridge the housing gap.  We look forward to further expanding the division across North Wales and into North West England.”