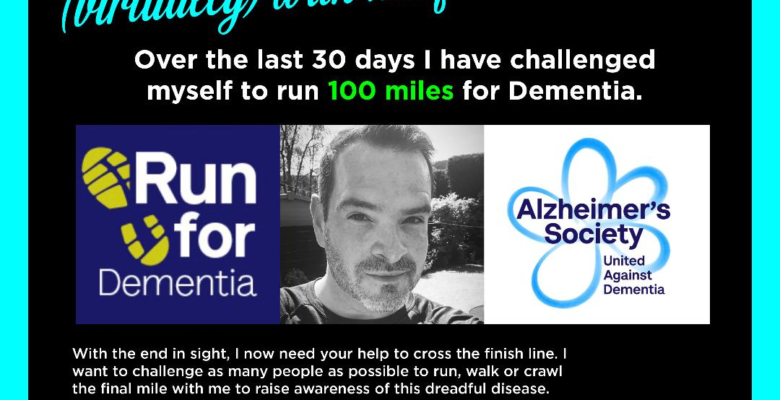 Press Office Manager at Manchester Airport, Seb Thompson, is running 100 miles in 30 days for a dementia charity while on furlough leave, and is encouraging others to join him virtually for the final mile.

Seb, from Poynton, originally pledged to raise £150 for dementia charity, the Alzheimer’s Society, following the death of his grandfather at the start of lockdown while furloughed from his job at Manchester Airport. He has exceeded his original fundraising target and is now about to hit the £900 mark.

Throughout the challenge the airport worker has kept supporters up to date on social media sharing his mileage each day alongside a dedicated Dementia fact, to educate as many people as possible about the illness. He now plans to mark the final mile by finishing at his grandparents’ care home, where his grandmother still lives battling dementia, and is using social media to ask others to join him virtually to raise awareness for the disease. Seb said:

When my grandad sadly passed away and none of us could visit and be there for my grandma, I decided to turn a negative into a positive by using my furloughed time for a good cause.

“At the start of this I could hardly run a bath let alone 100 miles so knew it was going to be a challenge, but was keen to do something to honour my grandad for a charity that is very close to my family.

“I have been on furlough for a number of weeks and that has given me the time to complete a run every day, and also to improve my speed and distance as the days and weeks went by.

“When I kept exceeding my fundraising goal, I decided to come up with something special to mark the final mile. As well as being great exercise for the body, the running has also helped the mind, and been a great release to get through the tricky periods of these uncertain times we are all in. This is why I wanted to encourage as many people as possible to join me virtually in the final mile, so not only can they help spread the word, but also do their bodies and mind some good in the process.”

“Every three minutes someone in the UK develops dementia, and there is currently no cure. The coronavirus pandemic is an incredibly worrying time for all of us – but the crisis is having an even greater impact on people affected by dementia, as some will be completely cut off from their families, their communities, and the networks they rely on.

“We’re delighted that Seb is taking on the challenge to run 100 miles in 30 days for Alzheimer’s Society. The money raised will go towards supporting our vital services and will fund crucial research to find a cure for dementia.

“Dementia devastates lives; it slowly strips people of their memories, relationships and identities. Every pound raised will help Alzheimer’s Society provide vital information and support, improve care, fund research and create lasting change for people affected by the condition, which is more vital than ever during this pandemic.

“Please support Seb if you can and donate to his JustGiving page at https://www.justgiving.com/fundraising/runfordementia-sebthompson .”

Seb has just six miles to go and plans to complete the final mile on Tuesday 2nd June. Anyone wanting to take part and join in virtually can contact him via Twitter.

The current time is tough for everyone, but coronavirus will hit those 850,000 with Dementia the hardest, which is why the Alzheimer’s Society launched its Run for Dementia challenge. It is challenging people to run 50 or 100 miles over 30 days and raise at least £100 in exchange for a medal. Seb added:

I would like to thank everyone who has sponsored me so far and been a real help to get me through the challenge. My knees have taken some knocks and I’ve had dozens of blisters, but it’s been so worthwhile. I’d also like to thank the people in my village for helping me exercise social distancing as I dart around at great speed, and also to SIZE Creative who kindly made my virtual mile call out graphic for free.”